Enter the wasteland
“I'm here today to tell you that because of your family's service to our country, you have been pre-selected for entrance into the local vault. Vault 111.”— Vault-Tec rep

War Never Changes is the prologue, a main story quest and an achievement/trophy in Fallout 4. The quest takes place on October 23, 2077, in the Sole Survivor's pre-War home in the suburban neighborhood of Sanctuary Hills. It begins immediately after the game is started.

The Sole Survivor begins in front of the bathroom mirror, preparing to go to a veterans hall meeting alongside their spouse. Upon finishing character aesthetic customization in the mirror, the player leaves the bathroom to answer the door. Within the house, one can interact with a variety of objects and goods, such as bottles of Nuka-Cola, boxes of Salisbury Steak, their infant son Shaun, and the house's resident Mister Handy named Codsworth. Opening the door, the player encounters the Vault-Tec rep, who states that they have been selected to enter the nearby Vault 111. During this speech sequence, the player's name and S.P.E.C.I.A.L. points are customized.

Once the customization is done, the Sole Survivor returns to find that Shaun is still crying, despite Codsworth's attempts to calm him. The player enters Shaun's room and tries to calm him down by spinning the mobile. Upon activation of the mobile, their spouse enters Shaun's room and engages them in conversation. Once this discussion ends, Codsworth rushes in and urges both Nate and Nora to the television. The distressed reporter on the television proclaims that nuclear detonations have hit New York and Pennsylvania before abruptly signing off. The player, with their spouse and son, then rushes toward Vault 111, alongside other Sanctuary Hills residents as U.S. Army vehicles block the streets, the air-raid sirens wail, and Vertibirds fly overhead, warning residents to evacuate as many neighbors panic and try to either head to the vault or evacuate. Upon reaching the vault gate, they find the Vault-Tec rep, who is refused entry and threatened by the officer as one of the power armored soldiers forces him to leave under threat of being shot by his minigun. The Sole Survivor then approaches the officer, who checks their credentials ("infant, adult male, adult female") and is then granted clearance to enter, wishing them good luck as the rest of them who cannot enter the vault prepare to face their inevitable doom, subsequently instructed by the Vault-Tec security to step on a platform that will take them into the vault.

Just moments before the platform begins to lower, a bright flash is seen, followed by a loud noise and a blast of smoke. A nuclear detonation has occurred on the outskirts of the Boston area and the platform rapidly lowers just in time as the blast wave hits Sanctuary Hills. The platform further lowers into Vault 111's entrance, where the player and a few other Sanctuary Hills residents approach the vault's entryway.

Once inside the vault, the player and the rest of the Sanctuary Hills survivors are screened by the vault overseer and Vault-Tec staff. The player is given a Vault 111 jumpsuit and is directed through a passageway. Within the vault, the other residents are anxious and struggle to grasp what just transpired. The Vault-Tec staff members try to reassure them, telling the player to allow them some space, and redirecting their attention to the vault's amenities. The player continues along the passageway to a room filled with several chambers, where a Vault-Tec doctor is standing. The doctor claims that the chambers are for decontamination purposes and the player is instructed to enter one of the cryo pods, with the spouse and Shaun taking another. Inside the cryo pods, the doors seal shut and an automated voice begins a countdown as they activate, with the player's vision fading to white.

The player is then jostled awake by the automated voice. The room outside is dark, with the other Sanctuary Hills residents still inside their chambers. Three unknown figures, a mercenary and two scientists, enter the room. They open the chamber holding the player's spouse and Shaun and the spouse wakes from cryosleep. Confused, the spouse asks what they are doing, and they demand to have Shaun. The spouse refuses and holds onto Shaun and after being asked and refusing a second time, the mysterious man shoots the spouse with his pistol and instructs the scientists to take the baby. The man turns to the player's pod, addressing them before they re-enter cryosleep.

Waking again as the automated PA system announces a malfunction, the player falls out of the chamber and stands up, shivering, beginning act one of the story with the quest Out of Time.

Shaun abducted by Kellogg as seen in the game 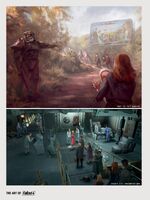 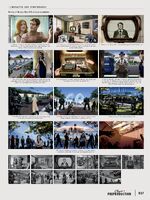