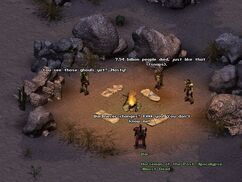 “I liked it better before the war.”

War is one of the Four Horsemen of the Post Apocalypse, found in a random encounter in 2197.

War, like the other horsemen, will stand around the campfire and argue. It's not like he has anything important to do, as the human race has already been effectively destroyed.

Like the other four Horsemen, he has a staggering 10,000 Hit Points.

War appears only in Fallout Tactics.

War's quote "War never changes? FUCK YOU! You don't know me!" is a reference to the iconic sentence that Ron Perlman says in almost every Fallout game, "War, war never changes."

Retrieved from "https://fallout.fandom.com/wiki/War_(character)?oldid=3298209"
Community content is available under CC-BY-SA unless otherwise noted.