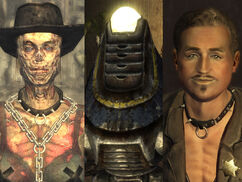 The new "employees" for the casino

“We've got the basics covered, but now that you mention it, we have had unusual requests from some of our wealthier customers. If you can recruit escorts to match these customers'... proclivities... I'd be willing to pay you finder's fees.”— James Garret

Wang Dang Atomic Tango is a side quest in Fallout: New Vegas.

The quest begins by speaking to James Garret, one of the Garret Twins, who are the owners of the Atomic Wrangler casino in Freeside. Ask James if he has any work for the Courier, and he will propose that they find him suitable "escorts" for clientele with very specific interests. He has three unique requests: A ghoul dressed up in a cowboy suit, a smooth talker, and a robot.

The ghoul wearing a cowboy outfit is Beatrix Russell at The Old Mormon Fort. Convincing her requires either a Speech check (35) or a Barter check (35), otherwise one can bribe her with a bottle of absinthe. When she agrees the Courier can either head to the Atomic Wrangler to get paid for the first escort, or find the other two first.

The smooth talker can be either Santiago, one of the dead beats Francine Garret hires you to find in the quest Debt Collector, or Old Ben, the chatty stranger standing outside the North Gates to the Strip. To recruit Santiago, just ask. For Old Ben, you'll need 50 Speech or the Confirmed Bachelor or Black Widow perk. It is possible to get both smooth talkers to agree, however only one will give you the reward. If you chose Santiago and Old Ben, Ben will show up at the Wrangler but you will receive no reward nor can you receive his services.

The robot is found at Cerulean Robotics (see that page for directions). There are a few giant rats inside and the large assembly room contains a robot in stasis. The computer is an average hack (50 Science). There is a keycard to unlock the computer, located behind an Average lock on the far right cabinet in the assembly room. The key to this cabinet is on the floor in front of the television under the decayed corpse. Once access has been gained to the computer, one must upload an operating program.

The robot can be programmed without the holotape if the Courier's Science skill is 60 or higher. After performing this upgrade in the factory, Fisto will offer a dialogue option to provide a 'service', if one accepts no damage is done, but will be able to complain about not being able to feel their legs.

Alternately, to get a holotape program to upload to the robot, the Courier must visit Ralph at Mick & Ralph's. He will mention the robot at Cerulean, and then will agree to write the program for 150 caps, advising the player character that it will take a couple days. If one has 50 Speech however, he will make it for free, or if with 35 Speech or 35 Barter, it will only cost 100 caps. It will take about 24 game hours to be ready. Take the program back to Cerulean and upload it to the robot. It will power up and the Courier will have a chance to "test it out". The screen goes dark and a peculiar drilling sound can be heard.

Once the 'testing' has ended, the Courier experiences numbness, which 'is normal'. Whether one decides to test the bot or not, the sexbot is informed that its owner is James Garret and it heads to the Atomic Wrangler.

With all three escorts found, head back to speak to James about payment. This will finish the quest.

The name of this quest is a reference to The Wang Dang Taffy-Apple Tango, a pop song written by J. Leslie McFarland and Aaron Schroeder. Pat Boone recorded and released the song in 1959.

Retrieved from "https://fallout.fandom.com/wiki/Wang_Dang_Atomic_Tango?oldid=2780614"
Community content is available under CC-BY-SA unless otherwise noted.