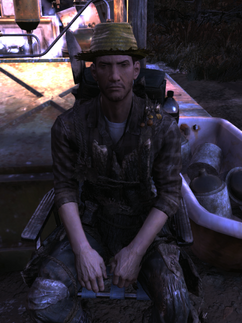 The wandering storyteller is a fabulist and potential random encounter in Appalachia in 2103.

One of the few in Appalachia with first-hand information on cryptids, the storyteller is eager to share with any who wish to listen. Having ran into the Sheepsquatch, snallygaster, and Flatwoods Monster, his stories typically involve late-night campfires and startling accounts of close encounters, in which he barely escapes with his life.

He travels with his two dogs, and lives life neither here nor there, typically eating, sleeping, and living entirely in the woods. While this rolling stone lifestyle suits him, it is precisely why he has had so many close shaves, leaving his survival a mystery, even to himself. He uses self-prescribed chems (such as Day Tripper) to remedy his trauma over these events.

He believes in the existence of God, seeing the various mutants as proof that humans should not meddle in God's affairs.

The wandering storyteller appears in Fallout 76, introduced in the Wastelanders update.

Retrieved from "https://fallout.fandom.com/wiki/Wandering_storyteller?oldid=3482976"
Community content is available under CC-BY-SA unless otherwise noted.