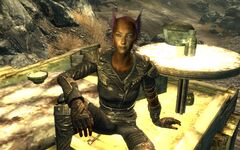 The wanderer (called a wanderer in-game) is a lone raider living in the Capital Wasteland in 2277.

The wanderer is accompanied by three guard dogs. They are found at their makeshift camp on top of an elevated platform made of floorboards, located east of Roosevelt Academy.

South of Roosevelt Academy is an elevated railway track. Follow alongside it heading east until one sees an explosive chain of cars ending in a bus. Hop down into the valley where the highway breaks off and a red train car has collapsed. Go down the valley a short distance northwest, and one will see a raised wooden platform on your left, which is their camp. The wanderer will be patrolling around this area, accompanied by three raider guard dogs.

The wanderer appears only in Fallout 3.

The location on the world map

The car pile-up and bus

The wanderer's home, view from the riverbed

The wanderer's camp close up
Add an image to this gallery
Retrieved from "https://fallout.fandom.com/wiki/Wanderer_(character)?oldid=3209790"
Community content is available under CC-BY-SA unless otherwise noted.