Fallout 2
“A Wanamingo's just the single orneriest critter there is. Tall as two men, stronger than a bull brahmin, and with flappin' suckers instead of arms. Can't be hurt with guns, neither. S'posedly, injuns called 'em up for revenge on the white-man for what the war did. I don't put much stock in that, though.”— Marge LeBarge about the Wanamingo

Wanamingos (also referred to as aliens) are mutant creatures that appear in Fallout 2.

Wanamingos are strange mutant animals that live mostly underground. Despite the rumors of their extraterrestrial origin, they were actually created with FEV as weapons for waging war on other countries and escaped into the wastes. In that aspect, they are similar to deathclaws.[Non-canon 1]

In Fallout 2, they are called "wanamingos" only in Redding and "aliens" elsewhere, but eventually, the name "wanamingo" came to be used for the species as a whole across the wastes.

Morphologically, wanamingos are bipedal lifeforms that bear almost no resemblance to any other form of terrestrial life. They possess a large central body with a sizable mouth full of razor-sharp teeth, and a pair of long, tentacle-like appendages that appear to be used for both grasping objects and to batter opponents in combat. The creature's large head lacks visible sensory organs, but it does not seem to require eyesight in order to discern the location of prey. The creatures are devastating in close combat, chewing at foes and lashing at them with their tentacles. Through a process not entirely understood, these attacks also induce radiation poisoning.

They hatch from eggs laid by a wanamingo queen - a large grey-colored wanamingo which others fearlessly protect. They aren't intelligent in terms of typical fauna, but the species is described to have a collective mentality.[Non-canon 2]

Long-lived but unable to reproduce without a queen, they are slowly dying out by 2241. The only known queen lives in the wanamingo mine in Redding. All "aliens" living in that mine are killed by the Chosen One in 2242. Other wanamingos can be found scattered throughout the wasteland between Redding and San Francisco, including in the San Francisco tanker.

Wanamingos are fierce foes and a potent threat to lower-level players. They are highly resistant to most damage types and can hurl a flurry of powerful attacks at their enemies in close combat. However, they have a natural weakness to fire and will flee if one of their feet becomes crippled.

Wanamingos are strange mutant animals that live mostly in underground colonies. They are often mistaken for extraterrestrial beings, due to their otherworldly anatomy. They can easily shrug off damage which would tear the flesh from the bone of a human, and are truly a force to be reckoned with.

The wanamingo queen is the matriarch of the wanamingos, found within the depths of the mine near Redding. This is the only queen known to exist in 2241. She can lay eggs for the reproduction of the wanamingos and can be found deep underground in her breeding room.

When targeting any form of wanamingo, the option to shoot an area labelled "the eyes?" appears. It is clear to see that the wanamingo doesn't have eyes, thus, when hit in said area, the player receives the dialogue "Wanamingo was hit in the eyes? for 'X' hit points, damaging its air (?) intake."

Wanamingos appear in Fallout 2 and appeared in Fallout 76 in plushie form as part of the Fallout 76 update One Wasteland For All. 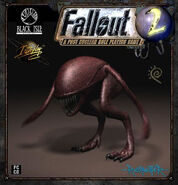