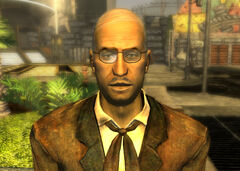 Walter without his hat

“He's got his reasons. And when that man gets a notion stuck in his head, he's like a Bighorn bull that's seen red.”— Ethel Phebus

Walter Phebus is a Californian bighorner rancher who has traveled to New Vegas in 2281, in hopes of getting revenge on Heck Gunderson.

Walter Phebus is bighorner rancher and brahmin baron[1] whose been herding bighorners since he was young.[2] Walter lives back west on Phebus Ranch with his wife Ethel. However, he has allegedly had some of his land taken by force by Heck Gunderson and his men at gunpoint.[3][4] Phebus, deciding that Gunderson needs to be taken down, has followed him to New Vegas, with his wife Ethel Phebus, seeking his revenge.[5] He is also a very stubborn man.[6]

It is possible to pickpocket Walter Phebus infinitely. Each time the player character attempts to pickpocket him, they lose karma but the item is never removed from his inventory. If one has a high enough sneak skill. With a high enough sneak skill, this glitch can be exploited to get the Artful Pocketer achievement very easily. The item selected is never actually added to one's inventory, however each time take the Karma loss is taken and the inventory menu is exited, it counts as a successful pickpocket. [verification overdue]