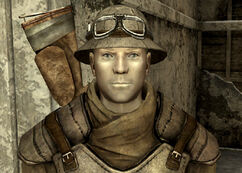 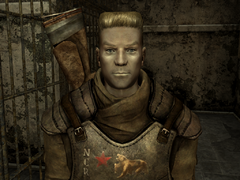 Walter without his helmet

“Boyd's there with the prisoner now. Boy, is she pissed.”

Corporal Walter Hornsby is an NCR MP stationed at Camp McCarran in 2281.

Corporal Hornsby is part of the NCR Army contingent deployed to the Mojave Wasteland in compliance with an executive order signed by President Kimball. Serving under Lieutenant Carrie Boyd, Walter is an MP stationed at Camp McCarran. He is monitoring the interrogation of a Legion prisoner of war, found standing guard next to the door to the interrogation room where the officer is being detained.

Retrieved from "https://fallout.fandom.com/wiki/Walter_Hornsby?oldid=3302158"
Community content is available under CC-BY-SA unless otherwise noted.