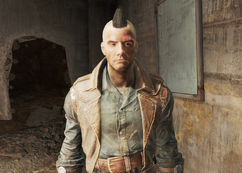 Walter is a raider at Walden Pond in 2287. Walter is hostile to the player character upon entering the Walden Pond gift shop basement.

Head of a small war band of raiders, Walter is surprisingly security-minded.[1] This group occasionally strong arms food away from Abernathy farm and the Sole Survivor may be sent to deal with them during the quest Raider Troubles.

Walter appears only in Fallout 4.

Retrieved from "https://fallout.fandom.com/wiki/Walter_(Walden_Pond)?oldid=3316745"
Community content is available under CC-BY-SA unless otherwise noted.