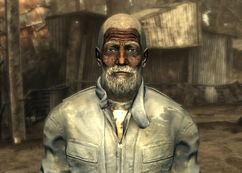 “What can I tell you about Megaton? Well, that fucking bomb is killing us all slowly. How's that for a piece of information?”

Walter is a resident of the settlement of Megaton in 2277.

Walter was born in 2216. He spends his days minding the machines and fixing drainage devices that break. He's increasingly worried about the state of the water and drainage structure, and knows it won't hold much longer - and neither will he. At 61, he's one of the oldest residents.[1] He also has a preference for Enclave Radio, though never actively listens to it, citing it as being "downright patriotic."

During the daytime, Walter can be found in the water processing plant for most of the day, though sometimes he will step outside for some air. During the night hours, he can be seen drinking in Moriarty's Saloon.

Walter appears only in Fallout 3.