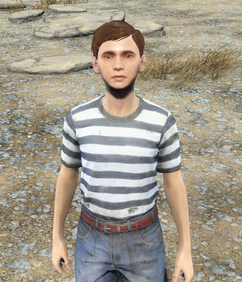 Wally Warwick is a child living at Warwick homestead in 2287.

The youngest of the Warwicks, Wally lives with his parents and helps with tasks around their settlement. He is frequently fighting with his older sister, and complaining about her tattling to his parents about him in an attempt to get him in trouble.

He is reluctant to talk to the Sole Survivor, but if convinced one is trustworthy, he will share that his dad has been acting strangely lately, and Bill Sutton thinks he has been replaced by a synth. Wally can be overheard asking his dad why he never goes to sleep anymore, to which his dad says he does, and that he has never felt better. The Sole Survivor can also learn from Wally that Bill has given Cedric some caps and sent him to Diamond City in an attempt to solve the synth problem.

Wally Warwick appears only in Fallout 4.

Retrieved from "https://fallout.fandom.com/wiki/Wally_Warwick?oldid=3290445"
Community content is available under CC-BY-SA unless otherwise noted.