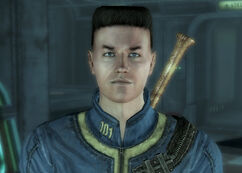 9 (during Growing Up Fast)
16 (during Future Imperfect)
19 (during Trouble on the Homefront and further quests)
29 (during Tunnel Snakes Rule!) 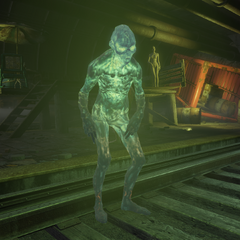 “This party's pretty good, I guess. For a little kid. Balloons. Party hats... Not as cool as my party though. Remember how my dad got Andy to do magic tricks? And we all played Hunt the Mutant in the Atrium? Oh, right... you weren't invited to my party. Too bad, man. It was really fun.”

Wally Mack is a resident of Vault 101 in 2277 and is a member of a greaser gang called the Tunnel Snakes.

Born in 2258, Wally is the brains of the Tunnel Snakes. He does not talk as much as the others, but they listen to what he has to say when he does say something.[1] He is one of the Lone Wanderer's peers in Vault 101 and is encountered throughout the Lone Wanderer's youth inside Vault 101.

By 2287, Mack had traveled to the Commonwealth where he reestablished the Tunnel Snakes. Setting up their base of operations in Fens Way station, they discovered old radioactive waste barrels, with Mack believing that the gang could gain superpowers from them. Over time, Mack and the other Tunnel Snakes succumbed to radiation sickness and transformed into feral ghouls.

During their formative years, the Tunnel Snakes harassed other students in Vault 101, even being bold enough to taunt the overseer's daughter, Amata Almodovar. Butch DeLoria presumes to be the leader of the Tunnel Snakes, but Wally Mack might disagree if challenged.

Wally is the son of Allen and Gloria Mack. Wally's siblings are Stevie and Susie. Butch DeLoria and Paul Hannon Jr. are Wally's friends and fellow gang members.

Wally during Growing Up Fast

Wally, Paul Hannon Jr. and Butch hallucination in the Vault 106
Add a photo to this gallery

Retrieved from "https://fallout.fandom.com/wiki/Wally_Mack?oldid=3469342"
Community content is available under CC-BY-SA unless otherwise noted.