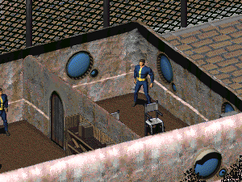 “This is the Customs Office for Vault City. We're responsible for keeping a log of all the goods that come to us via the caravans and supervising all transactions. All merchants must pass through customs before entering the city.”

Wallace is the Customs Official of Vault City in 2241.

A thin man with a pinched face and a sharply pressed vault suit,[1] Wallace is a distinguished official on charge of processing all merchants coming into the city, supervising transactions, logging caravans, and issuing day passes to visitors. As such, he has a detailed knowledge of all trade relations of Vault City with its neighbors and has developed quite the skills in eloquence and dealing with people.

His assistant is Skeev, who is particularly untrustworthy, but Wallace doesn't seem to care all that much. Wallace is only at the customs office outside Vault City during the day, which may make it difficult for some people to enter initially. Also, any crimes committed at night will be remembered by Wallace during the day, and he will not allow entry.

The player character can obtain a day pass from Wallace through several ways:

Retrieved from "https://fallout.fandom.com/wiki/Wallace_(Fallout_2)?oldid=3415357"
Community content is available under CC-BY-SA unless otherwise noted.