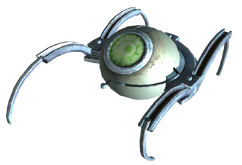 “Attention: Lobotomites. Do not neglect to wash the Walking Eye!*”— Doctor 0

Walking eye is a spying robot produced by the Big MT company. They have a spider form with four metallic legs and a white spherical body.

The walking eye is a prototype robot constructed in the Big Mountain Research and Development Center in the magnetohydraulics complex. It is a four-legged, spider-like robot similar to the Chinese spider drone with a white spherical body containing a graduated eye inside. They are used for espionage and surveillance. To this end they can climb walls and hang from ceilings for seemingly indefinite periods of time.

In 2281, there are still four known functional walking eyes remaining in Big MT, all stuck in the magnetohydraulics complex.

They cannot be targeted in V.A.T.S., destroyed, searched, or moved.

Walking eyes appear only in the Fallout: New Vegas add-on Old World Blues, if the player has the Wild Wasteland trait.

Walking eyes are a reference to an episode of The Venture Bros. entitled Fallen Arches, where Dr. Venture, voiced by James Urbaniak who also plays Doctor 0, uses his prototype walking eye as a lure to attract the attention of supervillains. This robot is, in turn, a parody of the walking eye robots in the Jonny Quest cartoon series.

The 4 walking eyes in the complex

Add an image to this gallery
Retrieved from "https://fallout.fandom.com/wiki/Walking_eye?oldid=3189861"
Community content is available under CC-BY-SA unless otherwise noted.