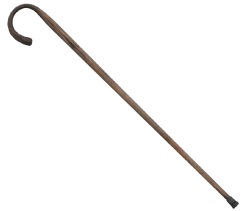 The walking cane is a weapon in Fallout 76.

A simple wooden walking cane with a rubber stopper for added traction used as a makeshift weapon. It is a one-handed melee weapon with decent damage and medium swing speed. The weapon bests the assaultron blade, with 2 more damage at max level.

Add a photo to this gallery
Retrieved from "https://fallout.fandom.com/wiki/Walking_cane_(Fallout_76)?oldid=3407452"
Community content is available under CC-BY-SA unless otherwise noted.