Walking Box Cavern is a location in the Mojave Wasteland in 2281. It is found due south of Dead Wind Cavern and west of the Legion raid camp.

A group of seven night stalkers spawn at the mouth of the cave, which contains some bones from previous prey. A hollowed-out rock is located straight ahead when facing away from the cave entrance.

The inside of the cavern is a relatively small cave filled with purple fungus. In the middle, a duffle bag can be found between the remains of earlier victims. The cavern's main corridor branches to a north room that is filled with four night stalkers.

The western room contains five night stalkers and a high level loot duffle bag. After three days, if the stalkers are killed, up to 13 other stalkers will respawn (4 x 100% chance, 5 x 75% chance, and 4 x 50% chance, first random encounter). After another four days, if four night stalkers are killed (those having 100% chance of re-spawning), two deathclaws and two young deathclaws will spawn (second and last random encounter).

A suit of reinforced combat armor with a helmet can be found in a duffle bag in the cave's western room.

Walking Box Cavern is located in the same geographical area as the real world Walking Box Ranch along Nevada State Route 164 in the Mojave Desert. 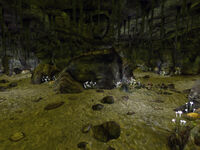 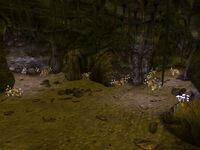 Purple fungus in the cave