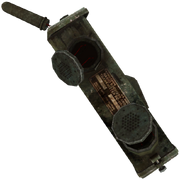 A walkie-talkie is a miscellaneous item in the Fallout: New Vegas add-on Honest Hearts.

It has the appearance of a United States Armed Forces handheld radio set, similar to those used by civilians for recreational uses.

Two can be found at the Zion fishing lodge, behind the bar counter in the cabinet.

The walkie-talkie appears to have been based off the SCR-536, which was used extensively by American forces during World War II. 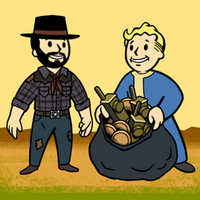 As depicted in Restore Our Fortunes.