Fallout 4
“Hello, and welcome to Walden Pond! You are now standing in front of the cabin inhabited by transcendentalist writer and philosopher Henry David Thoreau starting in the summer of 1845.”— Automated tour

Walden Pond is a location in the Commonwealth in 2287.

On the north shore of the pond, the former residence of Henry David Thoreau can be found.[1] The transcendentalist author lived in the cabin for over two years, starting in the summer of 1845.[1] Before the Great War, the site became a tourist attraction. A gift shop was built next to the cabin, and the audio tour associated with it was sponsored by General Atomics International.[1]

There is a drainage pipe in the southwest shore that is highly irradiated (+10). There is also an island in the middle without obvious significance which emits smoke. There is also a gift shop on the hill southwest of the pond. Thoreau's cabin stands next to the gift shop, its automated tour guide remains functional. There is a Master-locked door to the basement behind the counter. It is booby-trapped with a few makeshift bombs and a clapping-cymbal monkey doll. Next to the Master locked back door, held up by a knife, there is a "Note to Tweez."

The basement of the gift shop and the nearby tunnels are occupied by a small raider gang, led by Walter.[2] An earthen tunnel leads to a busted wall into the gift shop basement proper, which contains a number of shelves and cabinets. A hallway to the northeast has a staircase leading back up to the main gift shop.

When first entering, Tweez and Bear can be heard talking about Thoreau and transcendentalism. In this first room, there is a hunting rifle, duffle bag, and an issue of Tales of a Junktown Jerky Vendor. Walter and Whiplash can be found in the next room. The gift shop key found on Walter will unlock the safe in the room as well as the door to the gift shop. Additionally, Big Jim, a unique pipe wrench, can be found next to a toolbox. There is a Vault-Tec lunchbox in the corner next to a bottlecap mine.

When at this location companions make comments, which are activated in front of the cabin.

Walden Pond appears only in Fallout 4.

Walden Pond is based on the real world location of Walden Pond in Concord, Massachusetts. This location is where author and philosopher Henry David Thoreau lived in a cabin for two years, inspiring his influential Transcendentalist book Walden.

The door to the basement

Entrance to the sewers

Tweez and Bear talking about transcendentalism

Walter and Whiplash in the basement

The mysterious smoke that emanates from the island 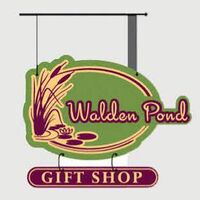