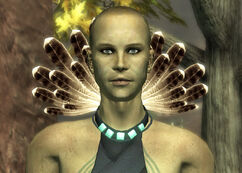 Quiet As The Waters

“Perhaps you do not fully understand the New Canaanites. I have seen the Father's images. His holy bride and holy son were given unto the world to save it. They dwelt in the caverns of the mountains, caverns which can still be seen today. The people sinned against Him, and were punished with the End That Came in Fire and the loss of the holy tongue. Only the New Canaanites were spared.”

Waking Cloud is a tribal living in Zion Canyon in 2281.

Waking Cloud is a Sorrows tribal, and one of Daniel's first converts. Daniel saved her life when she was giving birth to her third child, and taught her how to properly deliver children. She then became the Sorrows' midwife, and has started to learn Daniel's Mormon faith. Waking Cloud speaks with a good level of English, indicating she has been learning for a while.

Waking Cloud has a husband and three children, however her husband was killed by a White Leg as one of the first Sorrows to be evacuated to Grand Staircase. Daniel knows of this, but has kept it from Waking Cloud, fearing her reaction. Waking Cloud suspects that something is amiss, but trusts Daniel enough to know that he would not keep anything important from her.

Retrieved from "https://fallout.fandom.com/wiki/Waking_Cloud?oldid=3457087"
Community content is available under CC-BY-SA unless otherwise noted.