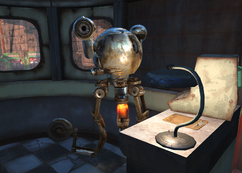 The waitron is a Mister Handy found at the General Atomics Galleria in 2287.

The waitron is the host at the Handy Eats Diner, inside the General Atomics Galleria. He serves food prepared by his partner Cook Handy.

Upon entering the diner, the waitron will offer the Sole Survivor the last remaining booth. All of the other booths are occupied by skeletal remains which, when asked, are simply referred to as "satisfied customers."

When choosing either the mashed, diced or sliced dialogue option, the Sole Survivor will always respond "Wait, what?"

The waitron appears only in Fallout 4.

The diner
Add an image to this gallery
Retrieved from "https://fallout.fandom.com/wiki/Waitron?oldid=3296159"
Community content is available under CC-BY-SA unless otherwise noted.