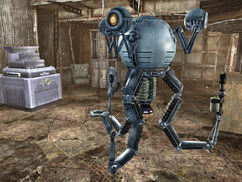 “Two cannibals are eating a clown. One cannibal turns to the other and asks, "Does this taste funny to you?"”

Wadsworth is a Mister Handy that can become the Lone Wanderer's personal butler in Megaton in the year 2277.

When the newest resident of Megaton looks to RobCo Industries to furnish them with the finest in mechanized butlers, one admirable choice is the Wadsworth model. With the latest in hair-cutting and "humor array" technologies (sample quip: "War does not determine who is right; only who is left"), and the ability to keep a home looking shipshape and almost presentable, the Lone Wanderer's metallic pal is fun to be with.[1]

Wadsworth appears only in Fallout 3.

Retrieved from "https://fallout.fandom.com/wiki/Wadsworth?oldid=3270678"
Community content is available under CC-BY-SA unless otherwise noted.
... more about "Wadsworth"
RDF feed
Has platform
PC +, Playstation 3 +  and Xbox 360 +