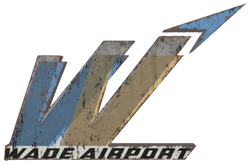 Wade Airport is a location in the Forest region of Appalachia.

Located just off of Interstate 59, outside of the capital city of Charleston, Wade Airport was the local airport for the southern region of Appalachia. From here, civilians and politicians could fly in and out of the capital city with ease, and not have to drive all the way up to Morgantown to fly out of the region. The airport was also popular with small aircraft, such as small biplanes, the airport tarmac, and hangars were littered with them and parts, presumably in the progress of repairs. Leading up to or on the day of the Great War, a Horizon Airlines plane crashed upon takeoff, prompting emergency crews to act.

At the northern end of the runway, there is a Skylanes Air crash site. This incident appears to have happened on the day of the Great War as there are firetrucks around the area. One of the wings is partially in the air traffic control building. The tarmac and some of the out-buildings have been fortified by super mutants.

It is a public workshop with claim and defend event quests. It also features a Poseidon power box, increasing the workstation's power for a time after completion of Powering Up Poseidon. It also comes with two vertibot landing pads and three heavy gun emplacements for defending the workshop.

Wade Airport appears only in Fallout 76.

Wade Airport is based on the real-world Yeager Airport, which, just like Wade Airport in-game, is located northeast of the city of Charleston, WV.

The wall next to the westernmost exit at the bottom level of the parking garage can be seen and walked through when approached from the inside of the garage.[verified]

Propellor on the ground

Southern area power armor
Add a photo to this gallery
Retrieved from "https://fallout.fandom.com/wiki/Wade_Airport?oldid=3497447"
Community content is available under CC-BY-SA unless otherwise noted.