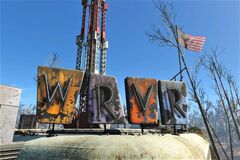 The WRVR broadcast station is a location in the Commonwealth in 2287.

Before the Great War, WRVR broadcast to the Greater Boston area. However, the broadcast tower was built in close proximity to the military's relay tower 1DL-109, meaning the station broadcasts would experience interference if the military found it necessary to broadcast.[1][2]

Since then, the Charles River Trio, comprised of George Cooper, Anne Hargraves, and Rex Goodman (if Curtain Call has been completed), may be found here. They perform plays on the radio, with Anne taking on all the female roles. She may be asked to join a settlement, however, and leaves readily, without any protests or remarks from her colleagues. Recently, Goodman, a member of the trio, was taken hostage by super mutants at Trinity Tower, and his comrades have been concerned that he won't return to them in one piece, if at all.

The station is a small, bunker-like building with a radio tower on the roof. It is situated next to a river and a bridge that spans the river. The interior consists of a reception area and a slightly larger room that leads to a bathroom and an acoustically treated studio. In the larger room is a ladder leading to the roof. It has a table containing an aluminum tray, upon which is a baseball bat and several baseballs, all of which may be freely taken.

The WRVR broadcast station appears only in Fallout 4.

George and Anne will initiate their conversation about Rex being held captive by the super mutants upon entering the station for the first time even if Curtain Call has been completed and Rex is already inside the station. [verified]

View from the front

Batting practice on the roof

Majestic flag atop the station

Location of the Live & Love issue #3

Retrieved from "https://fallout.fandom.com/wiki/WRVR_broadcast_station?oldid=3437527"
Community content is available under CC-BY-SA unless otherwise noted.