The WKML Broadcast Station is located in the northwest section of the Capital Wasteland in 2277. It is situated just south of Fort Constantine, north of Faded Pomp Estates, northwest of Silver Lining Drive-In, west of Drowned Devil's Crossing, and east of Dickerson Tabernacle Chapel.

Outside, a single ramp leads to the broadcast station. This station houses the source of Signal Kilo Bravo and the location of the Explosives bobblehead. Inside, there is a desk off in the corner and a partially destroyed panel of sorts on the wall opposite to the desk.

After going up the long set of stairs to the WKML building site, the sealed cistern can be located south-southeast of the building itself. One can walk directly south behind the station, over and down the rock cliffs, and the entrance grate will be to the left. Or, look for the part of the cliff behind the station that has an overhang; the grate is directly below this overhang. The entrance says, "Drainage gate to sealed cistern." 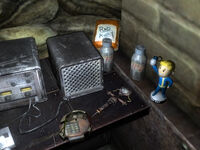 The WKML Broadcast Station appears only in Fallout 3.