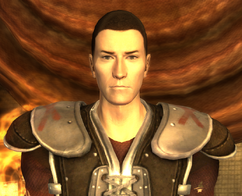 Leader of the frumentarii
Jack of Clubs 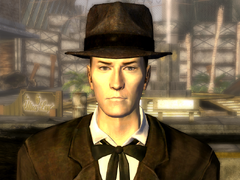 “Ah, yes - we are forbidden from speaking his true name. He was a shaman of some kind before he met Caesar, a holy man from out of the Utah. The Burned Man proved dangerous, unpredictable, and impossible to kill. He helped Caesar form the Legion but almost led it to destruction.”

Vulpes Inculta is the leader of the frumentarii in Caesar's Legion and one of the trusted men of Caesar, traveling in the Mojave Wasteland with a group of legionaries who ravaged Nipton in 2281.

A remarkable individual from an unremarkable tribe south of Utah, Vulpes was brought into the Caesar's Legion as a child. Having survived training, he was made a legionary and fought well enough to be promoted to the rank of Decanus. He became a Frumentarius following a brilliant tactical maneuver when in a battle against a tribe, he broke ranks and led his squad through a hole in the enemy defenses and capturing the tribe's chieftain. While his centurion wanted him crucified for disobeying orders, Caesar saw potential in the young Decanus and found a more interesting use of him.[1] Since then, Vulpes' tactics have been a point of contention among the Legion, and while Caesar knows of the use of spying and deceit in war, not everyone agrees with the methods employed by Vulpes. Especially the most likely candidate for next Caesar of the Legion: Lanius.[2][3]

According to Ulysses, Vulpes Inculta was responsible for the pacification of the Twisted Hairs at Dry Wells[4][5] once the Legion's campaign ended in Arizona. Those of the Twisted Hairs who resisted were crucified alongside Interstate 40. By 2281, Vulpes is the leader of the Frumentarii and the mastermind behind many of the Legion's intrigues, notably all the outreaches into NCR controlled territory including, Operation: Racket,[2] Battle of Nelson,[6] slaughter at Nipton as well as the destruction of Camp Searchlight,[7] which was destroyed after legionaries released the contents of several radioactive waste containers kept in the city's fire station. This severely weakened the NCR's position in the area and allowed the Legion to cross the Colorado River and establish an outpost at Cottonwood Cove.[8] Along with orchestrating most (if not all) sabotages west of the Colorado, Vulpes is very capable on his own and a master of disguise, having visited the Strip several times before giving the Courier the Mark of Caesar.[9]

Vulpes is a devout believer of the dogma of Caesar perpetuating all his acts for the Legion, and firmly holds loyalty up as one the Legion's core tenets along with martial excellence and justice.[10] Following Caesar's ideals, Vulpes took to massacring Nipton to send a message that none are safe from Caesar's reach and prove the moral debauchery of those living under the NCR.[11] Vulpes is particularly disgusted by disloyalty and makes a point of punishing those caught in Nipton in a similar way that disloyalty is punished in the Legion.[12] A special punishment was given to the mayor, Joseph Steyn, burning him alive on a tire fire for trying to deceive those he put under his care.[13] Vulpes is also disgusted by inaction and selfishness, making note of how, even though his men were outnumbered by those caught in Nipton, none tried to revolt during the lottery.[14]

* Only in Nipton
** Only on the Strip

Vulpes Inculta appears only in Fallout: New Vegas and is mentioned in the Lonesome Road add-on.[4]

In Latin, vulpes translates as "fox," while inculta can translate as "uncultivated" or "rough." 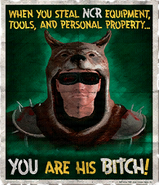 NCR propaganda poster
Add a photo to this gallery