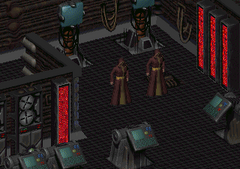 Vree, in-game (left). Next to her is Sophia

“I record the knowledge of our ancestors for future generations.”

Vree is the Brotherhood of Steel's Head Scribe (also known as Master Scribe[1]) and lead scientist in 2162.

As Head Scribe, Vree is in charge of knowledge gathering and preservation within the Brotherhood. She is intelligent, kind, and patient, happy with her work, and more than willing to help the Vault Dweller out, especially if she can be provided with more of the knowledge she seeks.

She is responsible for weapons development, as well as research conducted in Lost Hills under the Brotherhood. According to Talus, Vree is one of the most intelligent people he has ever known, as she was born with a natural understanding of physics and chemistry. She spends every waking moment doing research, or analyzing and re-analyzing anything she can get her hands on. Unlike her assistant, Sophia, she doesn't consider history (even the Brotherhood's history) very important, in contrast to her keen interest in scientific and technological research.

Destroy the Mutant leader: Prior to meeting the player, Vree conducted an autopsy of super mutant corpses and deduced that the mutants were all sterile, as recorded in Vree's autopsy report. If this disk is acquired by the player, they have the opportunity to convince the Master of the mutants' inevitable inferiority to humans as the master race, thus diplomatically settling the quest.

If asked to, Vree can grant access to a special terminal which teaches Science, permanently increasing the skill by 15 (30 if tagged).

Vree is alluded to in Fallout: New Vegas. A likeness of her appears in the faction icon for the Brotherhood of Steel.

Vree appears in Fallout as a talking head and is mentioned in the Fallout Bible.

"Greetings. It's a fine day for learning. Can I help you?"

"Speak to the knights. Ask them to show you one of the latest laser pistols I designed."

"I'm sorry, you're disrupting my meditation. Please leave."
Add an image to this gallery

Retrieved from "https://fallout.fandom.com/wiki/Vree?oldid=2787809"
Community content is available under CC-BY-SA unless otherwise noted.