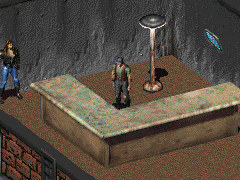 Get the map from the NCR Rangers, for Vortis the slaver
Free the slaves in the slave pen, for the Rangers

“Well then, you should know some folks see them as a potential problem. It would be extremely useful if we had a map of their safe houses through the north - New Reno, Klamath, wherever. I'd be willing to pay, oh say, $500 for something like that. You think you could get that for me?”

Vortis is a slaver living in the bazaar of NCR Town in 2241.

Vortis is an old slaver who runs a "holding center" in the bazaar of NCR Town, exploiting a legal loophole. Because the New California Republic has outlawed slavery, Vortis holds the slaves in pens just outside of the city (at the gates) for their owners, at a price. He has been a slaver for quite some time, and is aided in his work by other slavers, most of whom are seemingly "huge, but not too bright." He is a scrawny old guy with a pen stuck behind his ear and spectacles.[1] He's got about three teeth. His fingers and shirt are stained with blue ink. There's a really faded slaver's tattoo on his forehead.[2]

Vortis has been at odds with the NCR Rangers since their founding, due to his chosen profession and the Ranger's aim to abolish slavery and hunt down slavers in the region. Unfortunately for the Rangers, they have not yet been absorbed into a NCR military outfit, and are forced to act outside of legal channels to accomplish their goals of abolishing Vortis' slave trade.

Vortis appears only in Fallout 2.

Retrieved from "https://fallout.fandom.com/wiki/Vortis?oldid=3089394"
Community content is available under CC-BY-SA unless otherwise noted.