Nellis Air Force Base
Crashed B-29

Complete Volare!
“You picked a good time to stop by, for we're swimming in problems. My youngers can tell you all about it.”— Pearl

Volare! is a side quest and an achievement/trophy in Fallout: New Vegas.

Volare! is the final quest to complete for the Boomers, and the first one they receive upon entering Nellis. The Courier needs to help the Boomers around Nellis enough to become Idolized by them. This can be achieved by completing quests for them and by interacting with certain Boomers.

After becoming idolized, report back to Pearl in her barracks. She recommends asking Loyal about the Boomer's dream of flight, and he gladly tells a story about the submerged bomber and how he wants it to be raised from the bottom of Lake Mead. To achieve this, he hands out two deployable ballast devices, as well as his detonator.

Before heading to the Lake Mead, Jack can optionally be asked for a rebreather to allow for underwater breathing. To obtain it from him, passing a Science check (45) or bringing him a pressure cooker is necessary.

Travel to the map marker to find the crashed B-29, near Callville Bay. Quickly dive under and attach the ballasts between the two engines and underneath the wings, on each side of the bomber. A hollow 3D image marks the exact spot where to place the devices.

Once both of the ballasts are attached, travel to Callville Bay, where Loyal's detonator will start to beep, indicating that the Courier is in the correct position. All that is left to do is to equip Loyal's detonator as a weapon and fire it to raise the plane.

Travel back to Nellis and speak with Loyal (he has an optional Intelligence check of 7, with no impact on the outcome). Then talk to Pearl to complete the quest, which grants experience, a Boomer outfit and further raises reputation with the Boomers.

A closer look at the raised B-29 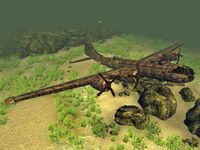