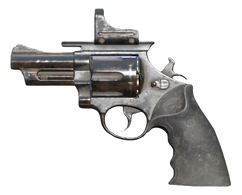 The Voice of Set is a unique weapon in Fallout 76.

The Voice of Set is obtained during the quest Prototypical Problems using the Order of Mysteries' fabricator. It is based on the .44 pistol and the fictional weapon used by the Mistress of Mystery.

To resemble the abilities of the fictional weapon, data is required from projects SIPHON and PULSAR from Sugar Grove.

The base damage of the weapon is 20% higher than the standard .44 pistol. Against robotic enemies only, the Voice of Set deals an additional 35 Electical damage, and when the Garb of Mysteries and Eye of Ra are also equipped, this damage is doubled and the weapon has a 25% chance to temporarily paralyze robotic enemies for one second.[verified]

The weapon shares only the appearance of a .44 pistol, but is otherwise a separate weapon entirely. As such, it cannot be modified at a workbench. It comes with a reflex sight and snubnose barrel by default.

Craftable during the quest Prototypical Problems.

Set was the ancient Egyptian god of deserts, storms, and disorder.

Retrieved from "https://fallout.fandom.com/wiki/Voice_of_Set?oldid=3472235"
Community content is available under CC-BY-SA unless otherwise noted.