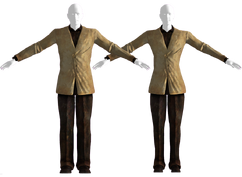 The Viva Las Vegas is a unique piece of clothing in Fallout: New Vegas worn by The King.

Somewhat grimy in appearance, it features a gold-colored blazer with a dark button-up collared shirt, slacks and lace up shoes. It appears the same on both male and female characters. Despite the fact that it somewhat resembles a suit, it grants no bonus to Charisma, Speech, or Barter like all other suits usually grant.

The outfit is worn by The King inside the King's School of Impersonation in Freeside and can be obtained by reverse-pickpocketing an item of clothing with a higher DT onto The King, or simply killing him.