The Vitale pumphouse (or pumphouse in game) is an unmarked location in the Commonwealth in 2287.

The entrance to the pumphouse can be found just south of Hub City Auto Wreckers and east of Finch farm. It is located near the water. There is a small corridor that leads to the actual pumphouse, containing two rooms. To get into the second room, one will need the combination, which can be found written on the south wall in the first room.

The code is written as "0451" but since the only number on the input device with a zero is 10, the actual code to be entered is 10-4-5-1. In the second room, there will be a red skeleton; next to its left hand will be the unique weapon, the Gainer.

The Vitale pumphouse appears only in Fallout 4.

The Gainer, next to the bloodied skeleton 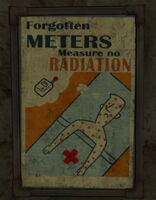 Poster in the first room