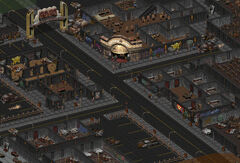 Virgin Street cuts a path right through town to the pre-War Reno sign, advertising "The Biggest Little City in the World". Along the left side of the street, there's a small ruined building that several squatters are camped out in. To the right, the illustrious Cat's Paw brothel awaits. There's a small parking lot in the southwestern corner. Jules stands near here, giving newcomers and tourists the low-down on Reno.

On the north end of the street, the bright lights and imposing façade of the Desperado casino gleam through the trash can fires. The Mordino family is headquartered here and the building serves as the hub of their drug empire. Virgin Street connects to Second Street.

Virgin Street appears only in Fallout 2.

Virgin Street is based on the real world location "Virginia Street" which serves as one of the primary streets in Reno, Nevada. Similar to the in-game equivalent, this street is where the famous "Biggest Little City In The World" sign can be found.

Retrieved from "https://fallout.fandom.com/wiki/Virgin_Street?oldid=3313285"
Community content is available under CC-BY-SA unless otherwise noted.