Fallout
Fallout 3
“The Vipers are a crazy bunch from up north. They worship snakes, or something.”— Killian Darkwater

The Vipers are a band of raider-tribals with a profound shamanistic nature originating from Vault 15 in New California with two other raider groups (Khans and Jackals). They were later driven into the Mojave Wasteland in the late 23rd century.

In 2097, Jonathan Faust, leading a group of two hundred people, left the overcrowded Vault 15 to brave the horrors of the wasteland. The group made it through the desert, eventually locating a small oasis that emerged around a large, crater-like pit. Shortly after making camp, Faust fell into the pit, after a member of the expedition startled him. After a nearly forty feet (twelve meter) fall, he discovered that the pit was a nest of vipers. They surrounded Faust, who let out one loud scream heard above, then disappeared. None of the three people who followed him inside ever returned, leaving two hundred people without leadership and with supplies on the verge of exhaustion. Worse, over one fourth of the people at the oasis suffered from radiation poisoning. Some of those who had the strength left the camp, while others remained for a week after Faust's disappearance, trying to come up with a plan, discussing reunification with other groups from the Vault or even going back to Vault 15.[Non-canon 1]

After that fateful week, as the group was preparing to move away from the oasis, Faust returned. Pale, emaciated, and with a feverish gleam in his eyes, Faust explained what happened in the pit, that he was visited by a god and learned of the True Way. The Way required sacrificing people to the Gods of the Pit in return for wealth and happiness. When the group expressed skepticism, Faust unleashed two giant pit vipers on the group and laughed as they attacked both him and the others. By the next dawn, the pit vipers were dead by Faust's hand, with a hundred people dead, the rest of them on the verge of dying. By the afternoon, just a fifth of the two hundred dwellers remained alive, maddened by the effect of the mutated venom. Faust helped them through the fever and hallucinations, forming the nucleus of the Vipers, in what came to be known as the Great Awakening. The Vipers built a shrine around the Pit, preying on the blasphemous wastelanders who rejected the Winding Way of the Great Snake.[Non-canon 2]

In 2125, they attempted to raid the Hub, a settlement in its formative years. However, thanks to a coordinated effort led by its leader Angus, they were defeated. The surviving members retreated to the north, roaming the wastes for many, many years, occasionally attacking caravans and small settlements.[Non-canon 3] Despite their defeat, the Vipers continued to thrive, rebuilding their strength from slaves captured in the wasteland. They settled into the badlands north of Hub and south of Lost Hills, intensifying their raids to provide for their greater numbers. High Priest Asp, crowned after Jonathan or the Great Snakekeeper grew too old and infirm to rule, was aggressive and confident.[Non-canon 2] His string of successes against frontier settlements and Hub caravans attracted the attention of the Brotherhood, who decided that the raiders would make excellent fodder for training exercises. However, they underestimated the religious fervor of the Vipers. John Maxson's elderly father led a squad of trainees in power armor against the Vipers, confident that the armored shells would be impervious to their weapons. He was correct, up until he removed his helmet and was nicked by a poisoned arrow. His death galvanized the Brotherhood. Head Paladin Rhombus retaliated with a merciless extermination campaign. The relentless attacks have destroyed the raider clan in the span of a single month, driving the few survivors into the mountains. Most fled California entirely, with only isolated warbands taking their chances. By 2162 they were almost all gone.[Non-canon 3]

The campaign served to open trade relations between the Brotherhood and the Hub after the order sent scouts and emissaries to root out Vipers in the populations. The merchants welcomed this new era and regular caravans soon started coursing between the city and the bunker, when previously they only made the occasional trip.[Non-canon 3]

Although the Vipers ferociously clung to existence, they never again rose to prominence. Any warbands that tried to return to New California were driven off, acting as practice targets for talented Army officers.[1] Routinely brutalized by the NCR, they have been returned to opportunistic, petty raiders who forgot their heritage, skulking in the mountains of the Mojave and ambushing merchant caravans to replenish their supplies.[2]

Before their near-extermination and loss of culture, the Vipers followed a unique religion created by Jonathan Faust, inspired greatly by the pit vipers they worshiped. Raiding primarily at night, Vipers preferred stealth to brute force, using a variety of melee weapons made from bone and laced with paralytic pit viper venom to incapacitate their victims, robbing them and taking the captives back to sacrifice them to the Gods of the Pit. They were known to use bone armor, crafted from bone strips wrapped tightly in leather and worn around the body.[Non-canon 4]

All Vipers answered to the Great Snakekeeper and their priests, obeying orders unto death. The Great Snakekeeper was distinguished by a viper skull helmet adorned with feathers and a snakeskin cape. The leaders of the Vipers presided over ceremonies and affairs of the tribe, clad in the same kind of armor as the rest of them. Immediately below them were the Crimson Tongues, the elite warriors. All Viper members also wore tattoos and exotic piercings.[Non-canon 5]

Special rituals included the monthly trance, when the tribesmen ingested a mixture of alcohol and venom, falling into a coma. It's virtually identical to the ritual of passage into adulthood that all Vipers had to undertake. Those who died or failed to awake from the coma in seven days were fed to the snakes in the Pit (called Children of the Great Snake). Those who survived were anointed as Warriors of the Snake or Chosen Ones. Priests underwent a separate ritual, taking small quantities of undiluted venom to suffer delirium and bizarre dreams. They claimed afterwards that the Great Snake came to them in their dreams, which gave the ritual its name, Time of the Summoning.[Non-canon 6]

Sacrifices were frequent, with prisoners hurled into the Pit at midnight to appease the gods.[Non-canon 6] Those prisoners who survived their encounter with the Pit Vipers were given the chance to avoid being sacrificed and join the clan. In return for this chance, they were expected to complete a task for the tribe, such as robbing a caravan or settlement for supplies, clearing a radscorpion nest or retaking a water spring from a foe. Succeeding would make the victim a part of the clan and grant their undying respect.[Non-canon 7]

In Fallout: New Vegas, the Vipers lost their distinct culture, forced to prey on wastelanders and caravans. They usually wear scavenged merc outfits, with a few wearing stolen metal armor, and fight with poorly maintained small arms, with the odd gunslinger brandishing half-broken grenade rifles. They are found in makeshift camps at the Horowitz farmstead, the highway 95 Viper's encampment and the raided farmstead, with several ambushes along major roads, like State Road 164 out of Nipton towards Searchlight or the road that branches off north, past Ranger Station Charlie to Novac. Another camp is found southeast of hidden supply cave.

The Vipers were one of several raider clans planned for Fallout, but were eventually cut. Several characters mention them, these include Aradesh, Ian and Killian Darkwater. Before its cancelation, Vipers were also supposed to appear in Van Buren, the canceled "Fallout 3" project by Black Isle Studios.

In Fallout 3 their background from the Fallout Bible was officially published.[3][4] Their first appearance was in Fallout: New Vegas.

“There were originally going to be two other raider tribes in addition to the Khans—the Vipers and some other group the Jackals. We had this idea worked out for the Vipers being in a cleft in a canyon with some beat-up wagons or motor homes, and a sort of snake-worship-cult thing going on. There was gonna be a quest where you could become an honorary Viper and go through their pit of serpents and gain the Snakeater perk for free. Sadly, we just didn't have time to actually build the map.”— Jess Heinig

A part of the Shrine, the cut content Vipers' base in Fallout

The logo used for the faction in the unofficial J.E. Sawyer's Fallout Role-Playing Game, with the original background texture. 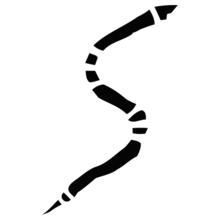 Transparent logo of the Vipers from the unofficial J.E. Sawyer's Fallout Role-Playing Game