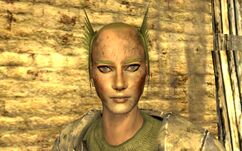 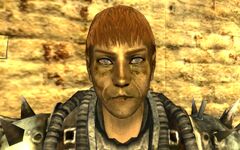 Viper leaders are raiders living in the Mojave Wasteland in 2281.

Viper leaders are the leaders of the remains of the Vipers gang, found across the Mojave. They make up the bulk of the firepower of Vipers, as they typically carry some of the higher-powered firearms, while the others have some form of pistol or melee weapon.

They also have nearly three times as much health as a regular Viper gunslinger, and have superior armor (most commonly being equipped with Leather armor, reinforced, and sometimes having metal armor). They are noticeably tougher and better equipped than their Jackal gang leader counterparts.

Viper leaders are somewhat rare, as not every group of Viper gunslingers will have a Viper leader accompanying them. Viper leaders can be found at the Viper ambush underneath a billboard west of El Dorado Gas & Service, Bonnie Springs, Horowitz farmstead, and inside Searchlight East gold mine.

Retrieved from "https://fallout.fandom.com/wiki/Viper_leader?oldid=3369865"
Community content is available under CC-BY-SA unless otherwise noted.