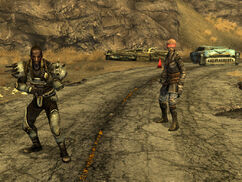 The Viper gunslingers at the Viper Gang ambush

“The colonel is an effective commander - one of the best - but she sharpened her claws on the Vipers and the old Jackals.”— Hanlon, about Colonel Cassandra Moore

Viper gunslingers are members of the Vipers gang living in the Mojave Wasteland in 2281.

Along with the Jackals and Khans, the Vipers were one of three legendary raider tribes that emerged from Vault 15 in the years following the Great War. Although once a great scourge on the wasteland, the Vipers have since been reduced to a very weak group of raiders by the law bringing forces of the emerging NCR.

Viper gunslingers in the Mojave Wasteland are very similar to their Jackal gang member counterparts; low-level raiders equipped with poor weapons and armor. Most wear merc outfits or less commonly leather armor, while a few wear metal armor. About half of them carry weak melee weapons such as knives or tire irons, while the rest carry firearms such as 10mm pistols or 10mm submachine guns.

The greatest difference between Viper gunslingers and Jackal gang members is that Jackals mostly wear wasteland outfits while Vipers mostly wear merc outfits. Vipers are also slightly better equipped than Jackals, being more likely to carry firearms, although their armament is still fairly poor and many of them still only have melee weapons. Viper gunslingers are sometimes lead by a Viper leader, who is significantly tougher and better equipped than their minions.

Viper gunslingers are hostile towards the majority of the Mojave Wasteland's other inhabitants, traveling merchants and prospectors, both the NCR and Caesar's Legion, and even other raider groups such as the Jackals and the Fiends.

Viper gunslingers primarily control the stretch of Highway 95 between Nipton and Novac, and are typically first encountered ambushing the player character in the highway canyon area east of Nipton. Viper camps can be found at the hidden supply cave, the train tunnels southwest of Ranger station Charlie, the Highway 95 Viper's encampment, inside the Searchlight East gold mine, on the highway near the El Dorado Gas & Service north of Novac and at the Horowitz farmstead north of New Vegas. A large ambush of several Viper gunslingers will appear at the raided farmstead once the player character enters the home/trailer there.

Female version 4
Add an image to this gallery
Retrieved from "https://fallout.fandom.com/wiki/Viper_gunslinger?oldid=3325806"
Community content is available under CC-BY-SA unless otherwise noted.