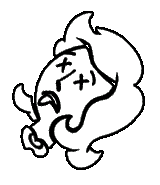 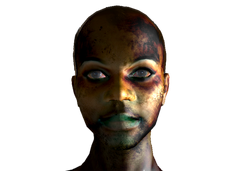 “Well, that could be Violet, or it could be someone else entirely. I'll take your word for it, but I can't give you a full reward.”— Major Dhatri

It is the head of the Fiend leader Violet. It is part of the quest Three-Card Bounty where the Courier must kill her and take her head back to Major Dhatri at Camp McCarran. If the head is damaged in any way, for example, by killing her via headshot, Dhatri can't determine the identity with certainty and will offer fewer caps as a reward.

She can be killed and her head taken at any time during the game. Due to its status as a quest item, it cannot be removed from the Pip-Boy inventory by any other means, aside from console commands.

Violet can be found in her trailer compound, just south of the Poseidon gas station. She is protected by many Fiend guard dogs, while she shoots from inside or atop her fort.

Retrieved from "https://fallout.fandom.com/wiki/Violet%27s_mangled_head?oldid=3323799"
Community content is available under CC-BY-SA unless otherwise noted.