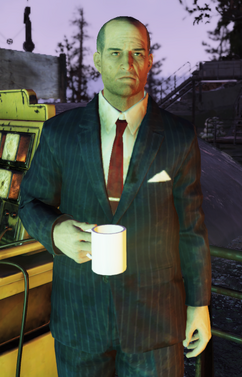 Vinny Costa is an employee of the Blue Ridge Caravan Company in Appalachia in 2103.

Vinny works as the Head of Operations of the Blue Ridge Caravan Company's operations in the Big Bend Tunnel and all around Appalachia, organizing caravans and hiring guns for hire to escort them throughout the territory.

Rudy Fernandez believes that Vinny sells the product lost by his own clients in the Big Bend Tunnel, as he does not return the goods to their owners.[1]

Vinny Costa appears only in Fallout 76, introduced in the Wastelanders update.

Retrieved from "https://fallout.fandom.com/wiki/Vinny_Costa?oldid=3233330"
Community content is available under CC-BY-SA unless otherwise noted.