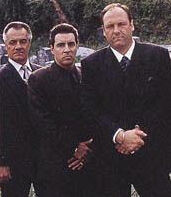 Vinnie Giordano is the owner and proprietor of the 3-Some Caravan company in 2253, along with his triplet brothers, Enzo and Guido.

The Giordano triplets are tight knit brothers who are virtually inseparable. Originally from NCR proper, they served a small stint in the prison there for petty theft. After serving one year, they decided to use what money they had left over and open a caravan company, the 3-Some Caravan Company. Business did not take off all that well since word got around they were former inmates, but there was enough business to keep afloat. The Giordanos felt it was their lucky day when their company was recruited to accompany Joseph Dodge to Hoover Dam, carrying supplies to last the journey and set up shop. This was like a second chance for the triplets, a fresh start.

Business fared better for the 3-Some Caravan Company in Hoover Dam, particularly with the riff-raff who originally settled there. The Giordanos never did anything illegal, but the impression that they were part of a lower class carried over from NCR, mostly thanks to the suspicious nature of Joseph Dodge and Ailis McLafferty egging on his suspicions.

Vinnie Giordano was to appear only in Van Buren, the canceled Fallout 3 by Black Isle Studios.

The concept design image used for the Giordano brothers is of three characters from the TV series The Sopranos: from left to right, Paulie "Walnuts" Gualtieri, Silvio "Sil" Dante, and Tony Soprano.

Retrieved from "https://fallout.fandom.com/wiki/Vinnie_Giordano?oldid=3375518"
Community content is available under CC-BY-SA unless otherwise noted.