Vinnie is the leader of the Skulz, a Junktown gang, around 2161. He and his gang have their headquarters in a large room at the back of the Crash House in Junktown.

Vinnie is a man with a bad attitude and a tattoo. A young and ruthless person, he tries to sound tough and is quite mean. The only people Vinnie respects are ruthless and violent people, like himself. Vinnie has a deal with Killian Darkwater - the Skulz let Killian be, and he does not bother them as long as they keep it low-key.

After the player talks to Vinnie again, he might display the dialogue of the quest regarding stealing Neal's urn without you having accepted the quest.

Vinnie appears in Fallout and is mentioned in the Fallout Bible. 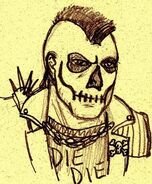