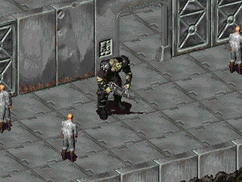 “I'm just watching the mads. Don't talk to me.”

Vincent is a super mutant in the Los Angeles Vault who guards the mad scientists in 2161.

Vincent appears only in Fallout.

Retrieved from "https://fallout.fandom.com/wiki/Vincent_(Fallout)?oldid=3364632"
Community content is available under CC-BY-SA unless otherwise noted.