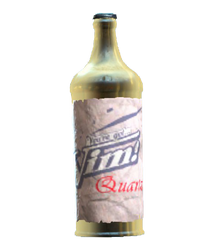 Vim Quartz is a soft drink in the Fallout 4 add-on Far Harbor.

A twist on classic Vim, Vim Quartz was bubble gum flavored[1] and contained extra "oomph" (or "vim"), making drinkers more energized. Vim! Pop Incorporated was in a dispute with Nuka-Cola over the use of "Quartz" in the drink title[2], as the latter company had already produced a drink with the name "Quartz," which is a special glowing white version of their signature drink, Nuka-Cola Quartz, which was regional exclusive in the Southwest Commonwealth. Nuka-Cola eventually won out, and it was predicted that Vim Quartz would be off the shelves by the following year. However, the bombs fell before any repercussions could take place.

Vim Quartz is one of the four known Vim flavors. The soft drink comes in a transparent glass bottle and is tinted a light yellow color which, like Nuka-Cola Quantum, glows in the dark. Quartz has a lighter label than the standard Vim flavor, sporting a white background with a purple, white and red logo. Considering its ingredients (bubblegum and carrot), it likely has a light, sweet flavor.

Consuming Vim Quartz restores a decent amount of health points and action points while also temporarily increasing carry weight by 15 pounds. It is most useful during the earlier game stages where the Sole Survivor's health pool and carrying capacity are still relatively small.

Provided the recipe has previously been downloaded from the research terminal inside the laboratory on the roof of the Vim! Pop factory, Vim Quartz can be crafted at any cooking station.

Retrieved from "https://fallout.fandom.com/wiki/Vim_Quartz?oldid=3315454"
Community content is available under CC-BY-SA unless otherwise noted.