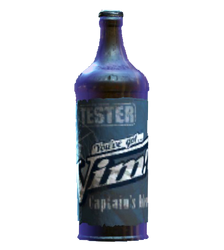 Vim Captain's Blend is a soft drink in the Fallout 4 add-on Far Harbor.

Vim Captain's Blend, test formula 10784, was in its testing state before the Great War. It hadn't yet been released on the market, though it was noted as being remarkably popular among focus groups. The #1 word used to describe the taste was "fishy." The company higher-ups were confused as to the popularity of the taste and were hesitant to put it out for a full release. The inspiration for the drink's odd flavor came from the marketing department team member Norman Fuller's request to put the "taste of Maine in a bottle." In fact, even the CEO hadn't been made aware of the ingredients causing the popular fishy taste.

The Captain's Blend is a result of Vim! research and development team member Iris Mason getting frustrated with Norman's vague request and taking bottles of Vim and mixing in fiddleheads, lobster shells and various extracts. Aster was later added to mask the aroma of the lobster shells.[1]

One thing working to the detriment of Captain's Blend, however, was testers remarking that it caused an odd-smelling sweat. One tester remarked that another "smelled like a pier" after drinking the beverage.[2] However, a side effect of the smell was how it made lobsters less prone to attack a commercial fisherman when he was removing them from the cages.[3]

All Vim Captain's Blend bottles have the word "Tester" printed on their label. Said label's rather simplistic blue and white print might be attributed to the product still being in its testing stage. The glass bottle's coloration is not clearly discernible due to it being almost completely full, but the beverage inside glows brightly purple.

Vim Captain's Blend makes all sea creatures more hesitant to attack the consumer while also restoring 100 AP and 600 HP, with the downside of temporarily lowering the drinker's Charisma stat by two points. The charisma drop aside, Captain's Blend's accumulated bonus make it a top-tier beverage that surpasses even Nuka-Cola Quantum in terms of healing qualities.

Provided the recipe has previously been downloaded from the research terminal inside the laboratory on the roof of the Vim! Pop factory, Vim Captain's Blend can be crafted at any cooking station:

No type of Vim including Captain's Blend confers any radiation to the consumer despite having been exposed to the Island's heavily irradiated environment for more than two centuries.

Retrieved from "https://fallout.fandom.com/wiki/Vim_Captain%27s_Blend?oldid=3539895"
Community content is available under CC-BY-SA unless otherwise noted.