One Wasteland For All / Steel Dawn character 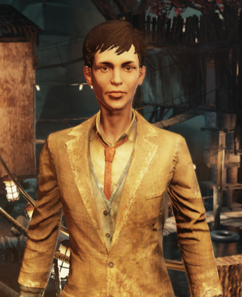 One Wasteland For All
Steel Dawn

“I never thought I could feel so at home in the apocalypse.”— Villager

Villagers are residents of the Retreat in Appalachia in 2103.

The villagers hail from all walks of life, but have all joined together to become one found family under the kindness and acceptance preached by Jennie Brown, who since became their leader.[1] Returning to Appalachia amid other humans but sometime after the Foundation Settlers and Crater Raiders in 2103,[2] they came across the abandoned treehouse village and converted it into their own home, renaming it "the Retreat."

Shortly after their arrival, the Retreat was threatened by Dagger and her Blood Eagles. As such, the villagers have increased their concerns about village security and stay vigilant against potential attacks, also translating to a slightly less trusting view of outsiders.[3] Nevertheless, they still welcome visitors with kindness, even warning them to take caution not to fall from the elevated platforms of the Retreat.[4]

Villagers appears only in Fallout 76, introduced in the One Wasteland For All update and expanded upon in Steel Dawn.

There is a cut dialogue quest (CUT_BS01_Dialogue_TreehouseVillage), as well as several cut voice types for the villagers. New content at the treehouse village has been developed since Wastelanders, including a cut quest known as Restoring Mosstown (CUT_W05_Community_Treehouse_Village_Quest). "W05" is an editor ID intended for content that is part of Wastelanders, while "BS" relates to the upcoming Steel Dawn content. The future of the treehouse village and its associated quests is not entirely clear.

Retrieved from "https://fallout.fandom.com/wiki/Villager?oldid=3416520"
Community content is available under CC-BY-SA unless otherwise noted.