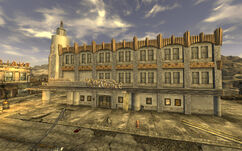 My Kind of Town
A Team of Moronic Mercenaries
Big Winner
A Pair of Dead Desperados, I
Big Winner, Vikki & Vance 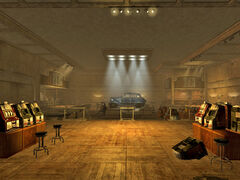 An overview of the casino

“The news has been brought to you by the Vikki and Vance Casino. {Slogan}Vikki and Vance. Be our partners in crime.”— Mr. New Vegas

The Vikki and Vance Casino is a casino in Primm in 2281.

This casino is named after the outlaws Vikki and Vance. When the player character first encounters it, the casino will be filled with Primm townsfolk. They have barricaded themselves inside due to the escaped convicts that have taken over the exterior areas of the town, killed the sheriff, and taken the deputy hostage.

Inside the entrance are rows of slot machines. Beyond the entryway is the casino floor, which is dominated by the death car, which is the car Vikki & Vance were driving when they were shot and killed. On the left is the cashier, where (once gambling begins again) the player character can buy chips and exchange currency.

Once the player character has earned 2,500+ chips, the casino will ban them permanently from further gambling.

Vikki and Vance Casino appears only in Fallout: New Vegas.

The Vikki and Vance Casino is based on the real world locations of Primm Valley Resort & Casino and Whiskey Pete's in Primm, Nevada.

Vikki and Vance Casino at night

The only working street light, near the casino

Someone made a mess

Primm Slim near the death car

Inventory icon for Vikki and Vance poker chips
Add a photo to this gallery
Retrieved from "https://fallout.fandom.com/wiki/Vikki_and_Vance_Casino?oldid=3348421"
Community content is available under CC-BY-SA unless otherwise noted.