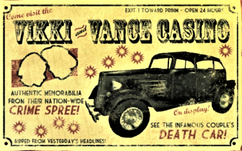 Vikki and Vance were "master criminals" before the Great War.

While not as widely known as the infamous Bonnie and Clyde, Vikki and Vance began their crime spree two days before them. Although, Primm Slim's account of the couple is less impressive, implying that Vikki and Vance were, in fact, only small-time white-collar criminals, perpetrating "a narrow swath of shoplifting, check-cashing fraud, and gas pump drive-offs." Their crime spree came to a halt in Plano, Texas when they accidentally drove their car through a crossfire between law officials and a gang of bank robbers, tearing both them and the car to pieces. The Plano Police Department released an official apology for their wrongful deaths.[1]

Despite their lackluster reputation, they were apparently considered notable enough to have an establishment dedicated to them: the Vikki and Vance Casino and Museum. The casino featured their death car, Vance's 9mm submachine gun and replica clothing items and all but the vehicle is missing, despite Primm Slimm's insistence. The plaque next to the empty gun case reads:

“The 9mm submachinegun preserved in this glass case to the left of this plaque is the ACTUAL weapon Vance carried in a paper-wrapped box under some suitcases in the trunk of his car during his and Vikki's crime spree! Never fired, and luckily untouched by the hail of bullets that ended its notorious owner's life, the weapon's mint condition inspires dread in all who look upon it. Experts speculate that Vance might have killed as many as fifty people had he ever fired the gun - so long as his aim was exact and he was starting off with a full clip - or even more if he had additional ammo clips and remembered to reload!”

The gun is currently in the possession of Sammy and Pauline Wins, who plan on using it to rob the casinos of the New Vegas Strip in an attempt to emulate the criminal duo of the past.[2]

There are mannequins that had once displayed replica clothing items belonging to Vikki and Vance, but the items are no longer displayed. A plaque describes the clothing and correlation with each part of the crime duo. Vikki's outfit plaque reads:

“These replica outfits show just how conscious Vikki was of the styles of the period. Vikki was well known for her sense of fashion and her fixation on expensive clothing was thought to be one of the reasons the pair chose a life of crime.”

Converse to Vikki's approach to fashion, the plaque located on the opposite side of the death car describes Vance's fashion sense as attempting to mirror how he imagined gangsters would look and that the items on display were merely articles of clothing that were found in the car's trunk. It reads:

“These mannequins display replicas of some of the clothing that was found in the trunk of Vikki and Vance's death care. Vance didn't share Vikki's sense of fashion, and chose to dress himself how he envisioned a gangster would dress.”

Vikki and Vance are mentioned only in Fallout: New Vegas.

Vikki and Vance are an obvious reference to the real life crime duo Bonnie and Clyde, who had a similar, albeit more legitimate, criminal career. The real life couple died in a shoot out with police (as opposed to between police and real bank robbers) on May 23, 1934, the date of which is the password to Sammy Wins' safe. The death car is nearly identical to that seen in game and is likewise displayed at the Vikki and Vance Casino's real world equivalent, Whiskey Pete's casino in Primm, Nevada.

Plaque regarding Vikki's sense of style

Retrieved from "https://fallout.fandom.com/wiki/Vikki_and_Vance?oldid=3274330"
Community content is available under CC-BY-SA unless otherwise noted.