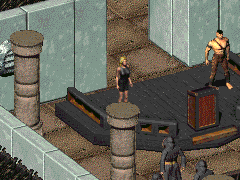 “Why, we were in the movie business in New Reno. We made hundreds of films, many of them classics, like "Top Bun," "Frisky Bizness," and "Days of Rubber". That's what makes us celebrities.”

Vikki Goldman is a blonde woman,[1] a celebrity, and a Hubologist.[2] She is seen standing next to Juan Cruz.

Vikki Goldman appears only in Fallout 2.

Retrieved from "https://fallout.fandom.com/wiki/Vikki_Goldman?oldid=3351477"
Community content is available under CC-BY-SA unless otherwise noted.