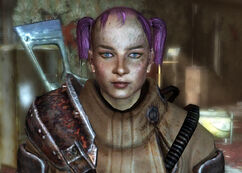 Those calling Vikia a "bitch" are met with a nodding approval from the woman herself; she is cold, calculating and a deft sniper, wildly aloof and condescending to all others. Call her worse than a "bitch" and one will find out just how deft a sniper she actually is.[1]

Vikia can generally be found on the roof of the raider barracks, engaging in target practice with her sniper rifle on several rows of bottles in the building window across from her location.

Vikia appears only in the Fallout 3 add-on The Pitt.

Retrieved from "https://fallout.fandom.com/wiki/Vikia?oldid=3259352"
Community content is available under CC-BY-SA unless otherwise noted.