Followers of the Apocalypse (formerly)
Carbon

Grey DeLisle
“I don't know who you are, but I'm glad you're here to help us. My name is Vidya, I guess I'm the town doctor. If you're hurt, I can heal you at no charge.”

Vidya is the doctor of the town of Carbon in 2208.

She is the closest thing to a good and decent person in the whole town. A former member of the Followers of the Apocalypse because things did not work out with them,[1] Vidya eventually found herself in Carbon helping its people with her medical training and what very little medical supplies were on hand, whether they were grateful for her efforts or not.[2] Vidya is shown to be knowledgeable about topics such as radscorpions, the history of the Carbon Crater and Necropolis.[3] She has not seen the super mutants yet, but has witnessed the destruction they have brought.

When the raiders burned down the town in retribution of the killing of their comrades in the Atomic Diner at the hands of a Brotherhood of Steel initiate, Vidya gathered as many townspeople as she could and hid with them in the old warehouse. When the Initiate tried to enter the warehouse, Vidya refuses to let them in until the raiders are dealt with, saying she is sure the Initiate can manage, much to the Initiate's annoyance. Vidya adds that she is sorry and implores them to save the townspeople.

After the town is cleared of raiders, she is thankful to the Initiate and is saddened by those who died, but she does not blame the Initiate, saying she knows they tried their best.[4] After the Initiate tells Vidya that the raiders will just come back and kill more townspeople in revenge, she agrees that they need to be eradicated. She directed the Initiate to the base of the raiders, an old mill on the outskirts of the town.

After Jane is killed, Vidya thanks the Initiate and gives them 100 caps before they go to Los.

Vidya appears only in Fallout: Brotherhood of Steel.

Vidya (विद्या) is a Sanskrit word that means “knowledge,” “clarity” or “higher learning.” The term is used in Indian/Hindu philosophy to describe both intellectual knowledge obtained through study (apara vidya) and spiritual or higher knowledge (para vidya) that leads to enlightenment. As a result, the term has become a name used for Indian women. 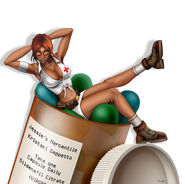