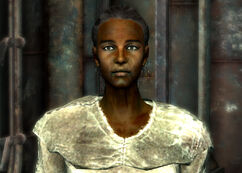 “Nothing stops the Railroad.”

Victoria Watts is a resident of Rivet City and a field agent of the Railroad in 2277.

This mysterious woman is allied with a clandestine group of ex-slaves, Abolitionists, working together with them and her like-minded colleagues up north to form a new type of underground railroad. She is forceful and bright and doesn't tolerate foolishness.[1]

The Railroad, like its namesake, works to protect escaped synths, who are akin to slaves. In January 2276, she volunteered to track a courser, who attempt to reclaim escaped synths, that was traveling south, for Railroad leader Pinky Thompson.[2]

A year later, she lives in the Capital Wasteland, registered as a resident of Rivet City. She stays to serve as a bodyguard for Harkness, helping to safeguard his true identity after the arrival of the head of the Synth Retention Bureau, Dr. Zimmer, and his synth bodyguard Armitage, searching for their missing "property."

Prior to the beginning of the quest Replicated Man, Victoria Watts lives as a generic citizen of Rivet City.

After delivering her quest-related message, Victoria will remain in the general vicinity where she first encountered the Lone Wanderer. She may attempt to travel to Rivet City, but she is incapable of fast-traveling and only moves position if the Lone Wanderer is in the same active map cell as her. As a result, she is almost certain to be killed in the wasteland if encountered far away from Rivet City.

If Victoria Watts reaches Rivet City, she will join the population there and performs a generic Rivet City citizen's daily schedule. She can be spoken to again but has no additional dialogue.

Victoria Watts appears only in Fallout 3.

Retrieved from "https://fallout.fandom.com/wiki/Victoria_Watts?oldid=3248207"
Community content is available under CC-BY-SA unless otherwise noted.
... more about "Victoria Watts"
RDF feed
Has platform
PC +  and Xbox 360 +