“He showed up... and he knew everything. Every Old World discovery I chanced on, he knew it better. Every novel idea I thought I had was a childish thought to him.”— Goddard, Goddard dialogue pieces

Victor Presper is an NCR-affiliated mad scientist and one of the smartest people in the former United States, living in the American southwest in 2253. He serves as the primary antagonist of the canceled Van Buren.

Dr. Presper has a simple dream: to preserve the master race, humans.

The good doctor was born and raised in the area known as Shady Sands. He spent many of his years as a scientific advisor to President Tandi before his disillusionment settled in, fueled by the Caravan houses that ate away at the NCR. When his breaking point finally came, Presper became determined to find a way to rid the world of chaos and human impurities and discovered his savior in Limit 115. Through extensive research, Presper discovered the history of Limit 115 and its genocidal potency, thereby discovering a viable means to cleanse the world. Using ODYSSEUS, the quarantine prison, and a ballistic satellite known as B.O.M.B.-001, the way to human planetary domination and order became clear. He would get to B.O.M.B.-001 and use nuclear weapons to clean the filth and wretch that currently occupied the surface.

Presper and his followers released the New Virus in the remote areas near Boulder and Denver. It was close enough to the quarantine prison to spur ULYSSES into action, but not near enough to huge populations to start a general panic. Once enough people were infected and ULYSSES "arrested" enough people to just about fill up the prison, Presper infected himself, Coleridge, and a handful of loyal soldiers so they too could be taken into the prison. Once there, the rest of Presper's uninfected men would stage an attack on the prison, which would allow everyone to escape. This event would start a countdown for the missile launch on B.O.M.B.-001. ULYSSES would assess the viral spread, try to gather up the escaped prisoners, and once 90% of the prisoners had been retrieved, launch nuclear missiles to "clean and prevent" any further infection. By the time this happened, Presper had planned to be on, and in full control of, B.O.M.B.-001, reprogramming targeting solutions to clean the areas he wanted. Humans of his choosing would wait out the second nuclear holocaust in the Boulder Dome until the day came where he declared the Earth safe for pureblood humans once more. The only thing that really was a time-consuming factor for his plan was figuring out the launch codes on the satellite. But Presper knew he was more than intelligent enough to eventually figure it out. After all, he was far more intelligent than the monkeys who originally programmed the launch computers on B.O.M.B.-001, or so he thought.

Victor Presper has not appeared nor is he mentioned in any published game. He was to appear only in Van Buren, the canceled Fallout 3 by Black Isle Studios.

In Chris Avellone's initial plot outline for Fallout 3, doctor Matthias "Huxley" Presper was a pre-War scientist, the co-creator of the ZAX supercomputer, as well as a Scientific Advisor to the pre-War president. In this early version, Presper went into hibernation a few days before the nuclear holocaust, woke up in the Boulder Dome, and emerged hundreds of years later, into the world to discover (to his surprise) how much "civilization" survived, before he wakes up the rest of the scientists frozen beneath the Boulder Dome. Presper is the only person left alive who knows all the passwords and control schemes for the ZAX computer and various other super-weapons across the world. It was intended that the Prisoner's actions in the various towns serve to convince Presper whether he should wipe all life from the planet before waking up the rest of his colleagues. Of course, the problem becomes that Presper and his crew are carrying the New Plague virus that struck to the US shortly before the war broke out (the virus that they had to develop FEV to counteract), so as soon as Presper leaves the Boulder Dome, the more communities he has contact with, the more people become infected and die.[1] 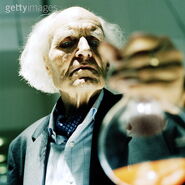